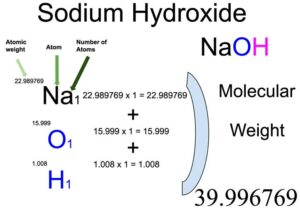 Step 2: Find out atomic weights of each atom (from periodic table).

Step 3: Calculate the total weight of each atom present in Sodium chloride by multiplying its atomic weight by its number.

Step 4: Calculate the molecular weight of Sodium chloride by adding up the total weight of all atoms.

Let us know if you liked the post. That’s the only way we can improve.